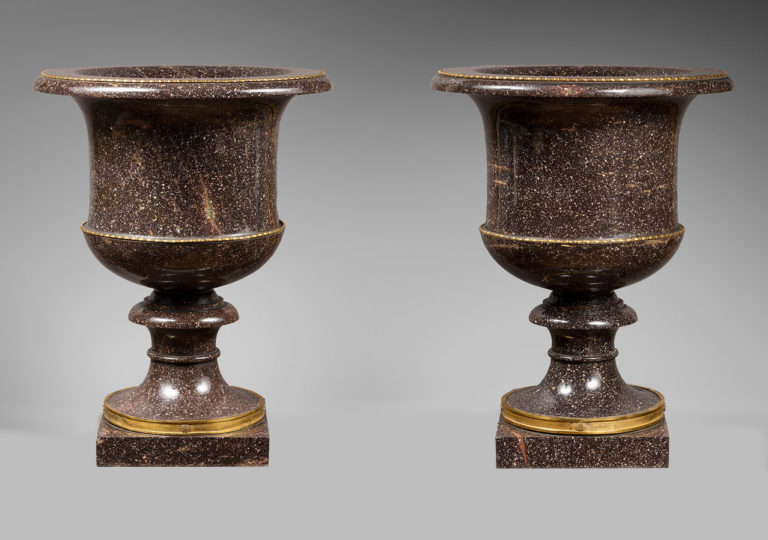 A pair of vases of a very similar model to our vases , has been offered by Karl XIV John to the Duke of Wellington, and belongs now to the collections of Apsley House, London residence of the First Duke of Wellington.

Being a hard stone, porphyry is extremely difficult to cut and polish, varying in color from red to green, presenting often Feldspath stains. Considered as the most noble antique stone, and because of its purple color, it has always been used for objects symbolizing power.

The porphyry used in Antiquity was a deep purple stone extracted from Mons Porphyrites in Egypt; and when the Roman Empire took control of Egypt, purple being the imperial color, a large number of pieces were produced.

For the same reasons, this same craze took place in France following the Napoleonic incursions into Egypt and the establishment of the French Empire. A lot of Grand Tour objects were produced in porphyry, associated with other marbles.

In 18th century, Sweden became the most important producer of porphyry for Europe.

The stone is discovered in 1731 in the valley of Älvdalen, and Carl Linnaeus noticed it in 1734 while traveling through the region. In 1780, some experiments were carried out and Älvdalen quickly became the main mining center for porphyry. Porphyry production destined for Europe remained concentrated in this region, and the architect Carl Fredrik Sundvall was famous to design a lot of models for vases.